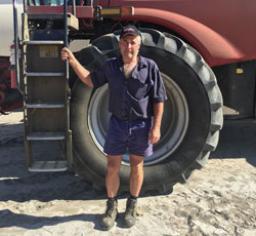 Departments of Agriculture from Western Australia to New South Wales have reported an increase in root diseases in cereals this season.

These diseases include the potentially damaging crown rot and rhizoctonia.

The impact of these root diseases has been minimised in instances where farmers have implemented appropriate management strategies and used seed treatments.

Farming 5000 hectares in a mixed farming operation comprising of 9000 merino sheep, Eric also crops wheat, canola, barley, oats and lupins. Crops are rotated on either a wheat/barley/canola or a wheat/oats/pasture rotation.

Eric tried Rancona Dimension last season on advice from his local Hannaford Franchisee to help combat the dust issues and air seeder flow problems he was having with other seed treatment products. He also wanted to use Rancona Dimension to help manage rhizoctonia and crown rot diseases in his cereal crops.

The use of Rancona Dimension is paying off for Eric with trouble-free application and less root disease generally seen in his crops this season.

"We have been using an opposition product which was too dusty and had issues with flow problems through our air seeder." Eric said.

"Derek Batchelor, my local Hannaford Franchisee, suggested trying Rancona Dimension. Derek's advice removed the issues that we had with the opposition products - resulting in no dust problems and good flow through our air seeder with the Rancona Dimension."

Eric added that he was "happy with the results we achieved so far and will be using Rancona Dimension again in 2017."

It provides smut and bunt control, pythium control and suppression of crown rot and rhizoctonia when applied to wheat and barley seed at the recommended rate.

Its unique micro-emulsion (ME) formulation provides extremely low dust off at application and easy clean down of machinery compared to other products.

Crown rot has been widely reported at low levels in many WA wheat crops this season. If crown rot was evident this year, consider using Rancona Dimension next season or resting the paddock from cereals.