Vitaflo and Vitavax contain the active ingredient carboxin. Carboxin is a powerful systemic fungicide that controls smuts and bunt. When used at a rate of 1.25 L/t, Vitaflo will control bunt and flag smut of wheat and covered smut of barley. At double this rate (2.5 L/t), Vitaflo will also control loose smut of wheat and barley. Untreated seed renders the crop vulnerable to infection by smut. Smutted grain may be downgraded or rejected at the receival site. There is nil tolerance for bunt in wheat, and tolerance of only three loose smut infected grains/0.5 L wheat or feed barley. Loose smut infected barley is not accepted for malting.

Soft on seed - does not delay or hinder germination

Most seed treatment fungicides, contain older active ingredients from the triazole family. Some of these older type actives act to delay or even reduce seedling emergence. Carboxin is soft on seed and has no adverse affects on germination and coleoptile development, improves emergence and healthy root development.

NB: 'Australia' results have been averaged over the individual trials, not average emergence as presented.

Does not retard coleoptile growth 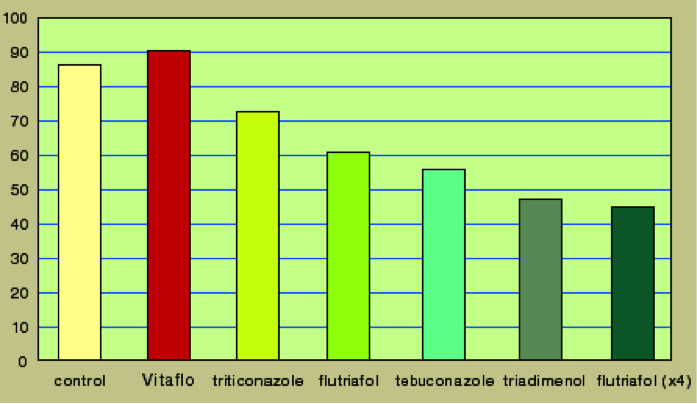 The coleoptile is a sheath that guides the germinated shoot through the soil to the surface. The first leaf emerges from the coleoptile. Triazole seed treatments may reduce germination and seedling emergence because they retard the growth of the coleoptile by up to 30 mm.

Carboxin does not have this negative effect on the coleoptile and actually works to improve emergence. The coleoptile is critical to getting the crop out of the ground quickly. Early emerging seedlings have a higher probability of producing more grain than those emerging a few days later. Hence, seed treated with Vitaflo tends to produce higher yields than that treated with a harsh triazole.

Best option when seedlings are stressed

Seed which endures stresses such as deep sowing, waterlogged soil, heavy (clay) or crusting soils, should be treated with Vitaflo. Some triazole seed treatments may retard the coleoptile providing a further hindrance to emergence. Additionally, it has been found that seed sown into warm soils has a shorter coleoptile. Therefore, seed sown early into warm soils in Northern New South Wales and Queensland should be treated with Vitaflo to optimise crop emergence. Cold temperatures, certain herbicides and even urea may also affect crop establishment. Where these are of concern, Vitaflo should be used to ensure the seed treatment does not contribute to compound the stress.

Best option for use with trifluralin

Vitaflo is safe to use with herbicides such as trifluralin at the time of sowing. The coleoptile-retarding action of some triazole seed treatments mixed with that of trifluralin can reduce crop emergence. If a foliar disease-controlling seed treatment from the older triazole actives are to be used, treated seed should be sown just below the trifluralin layer.

It has been shown, over hundreds of trials, that if seedlings emerge quickly and early, crop yield potential is increased. Vitaflo has a positive effect on coleoptile growth and assists the crop to emerge quickly. It protects the plant against smuts and bunt, and helps the seedling to better tolerate adverse growing conditions.

The 'C' in Vitaflo C stands for cypermethrin. Cypermethrin is an insecticide that stops weevils and grain borers attacking grain during storage. Note that the insecticide activity is diminished by high temperatures and other conditions, thereby affecting the duration of insect control in stored grain. 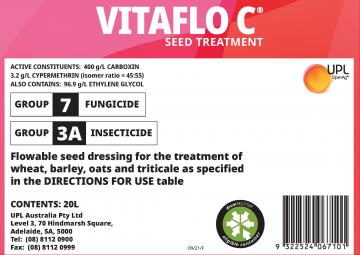