The application of trace elements to field crops in order to improve plant nutrition is a common practice in Australia. They may be applied as soil fertilisers and sprays, foliar sprays and seed coatings. By improving available nutrition in deficient soils, yield can be maximised.

Trace element seed coatings deliver precise quantities of nutrients close to the seed to enhance the seedling nutrient status. The effectiveness of these treatments is dependent upon the immediate environment of the treated seed. In areas of severe nutrient deficiency, seed coatings will not supply adequate nutrients for the full season; foliar sprays and soil fertilisers will need to be applied. Where there is less severe deficiencies the application of a seed coating is usually adequate for the full season. In Australia, the most common trace element deficiencies are zinc, manganese, copper and molybdenum.

Zinc deficiency is common on many soil types including calcareous, heavy clay, alluvial, sandy soils and peats. It is especially common on soils low in organic matter and of high pH. Availability of zinc may be reduced by water logging and where root growth is restricted. Cool wet weather, low light intensity or high soil nitrogen, phosphorus or copper may intensify the deficiency.

Cereals: In a mild deficiency, pale green stripes appear on either side of the mid-rib of young leaf blades. On middle-aged leaves, these stripes become necrotic and the colour of the central leaf changes to a muddy grey-green. In severe deficiencies, leaves yellow and the plants are stunted. Dead patches on the leaf cause it to bend or collapse. Both mild and severe zinc deficiencies will reduce grain yield.

Legumes: Faba bean plants become stunted. On leaves, the areas between veins become yellow. Lowest (oldest) leaves yellow completely. Maturity may be delayed. On lentils, the symptoms appear in the young leaves, which become pale and form rosettes. Brown spots may appear around the midrib. On peas, the lower leaves become brown and die around the edges and tips, while the stems stiffen. Flowering is reduced.

Because symptoms differ between plant types, farmers are encouraged to seek professional advice where a nutrient deficiency is suspected. 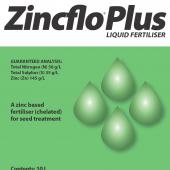 Zincflo Plus is a chelate form of zinc that is completely soluble so that it delivers this essential micronutrient.