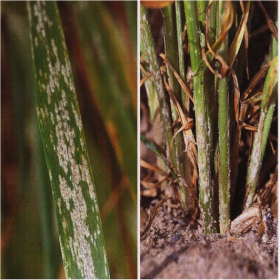 Powdery mildew in barley and other grasses was first recognised centuries ago. This disease is widely distributed throughout the world, from humid to semi-arid regions. Powdery mildew is found on the leaf surface. The disease appears as white fluffy patches, which turn grey when they mature, ranging from small isolated spots to complete leaf coverage and sometimes on the head. Leaves turn yellow-brown as the disease progresses.

The spores germinate and infect the leaf surface, where they use available nutrients, thereby reducing photosynthesis and increasing the energy requirements of the host plant. Infected plants have reduced growth and vigour; heading and seed filling are impaired. Heavily infected leaves and even whole plants can be killed prematurely. Yield losses are proportionate to the level of attack. Losses of up to 40% have been recorded and are greatest when the plants are infected in the seedling stage.

This disease can infect all aerial parts of the plant from the time of emergence onwards. It does not often persist beyond head emergence.

Powdery mildew over-summers as spores in crop residues, on volunteer barley plants and on the soil surface. These spores can be splashed or blown onto the leaf surface of emerging seedlings, where they germinate and penetrate the cells of the leaf directly. Root-like structures are produced which extract sugars from the growing barley cells.

On the leaf surface, a cotton-like spore mass grows and can be dislodged by wind to infect other leaves on the same plant or other plants. This disease requires conditions of high humidity and so its severity is seasonally dependent.