Loose smut of oats can be found wherever oats are grown, as they are seldom treated with seed treatments. The level of treatment is low because oats command a lower sale price than other cereals and hence it is thought that treatment is uneconomic. Loose smut of oats, unlike that of wheat and barley, can thus infect up to 80 per cent of a crop.

As with wheat and barley the grains of loose smut infected oat plants are completely replaced by the smut fungus. It is not evident until heads emerge and is very difficult to distinguish from covered smut.

As for wheat and barley; however, the loose smut fungus is carried on the seed surface and not inside the embryo of the seed. The pathogen is activated when the infected seed germinates, and it extends toward the growing point of the plant.

Evident from flowering onwards when the plant begins to form the head, the fungus invades all of the young head tissue except for that of the rachis (backbone). Production of plant growth hormones by the fungus results in infected plant heads reaching flowering earlier than healthy heads. 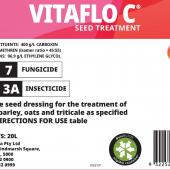