Field crickets are largely a pest of pastures on cracking clay soils, although they are widely distributed in south-east Australia. Having emerged as adults in mid-summer, females do not oviposit until the ground is wet either as a result of a late summer thunder-storm or more usually after the passage of a cold front in the autumn, initiating the "autumn break". Normally these eggs enter diapause to overwinter, however some eggs hatch before winter and laboratory experiments suggest this may be induced by high soil temperature. Higher temperatures combined with an increased summer rainfall are likely to lead to a more rapid rate of development and breeding all year round. Adults and nymphs eat above ground portions of seedlings generally at night. They may attack more mature sunflower plants feeding on the back of heads and developing seed. They also can attack soybean and mungbean pods. 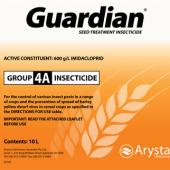 Guardian provides control of a variety of insect pests in a range of crops and the prevention of spread of barley yellow dwarf virus in cereal crops.