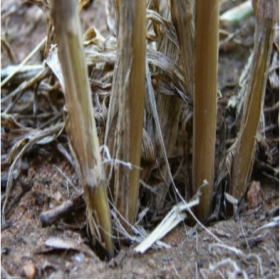 Crown rot, which is a chronic problem throughout the Australian wheat belt, is caused by the fungus Fusarium.

Fusarium pseudograminearum is the main cause of crown rot in Australia. F. culmorum can be important in the higher rainfall areas in South Australia and Victoria.

Crown rot is usually not obvious until after heading, when whiteheads appear. Individual plants or patches; sometimes first seen in wheel tracks. Whiteheads develop with the onset of water stress, usually after flowering. Durum wheat is highly susceptible. The extent and development of crown rot is influenced by the interaction between soil and plant water potential, soil N and inoculum loading. Yield loss can occur even without the formation of whiteheads.

Major yield losses occur when disease levels are high and there is moisture stress during grain fill. In these circumstances yield loss can be up to 90 per cent in durum and 50 per cent in bread wheat. Grain quality is not greatly affected in barley but screenings may increase in bread wheat and durum. Durum is very intolerant, losses in trials conducted in northern NSW averaged 60% (13-90%) in durum, 25% (3-55%) in bread wheat, 20% in barley and 23% in triticale across 11 sites. There is 130-150,000 hectares of durum grown Australia wide each year (8,500 tonnes seed).

Yield losses tend to be greater in drier springs, although crop production generally is lower, grain prices can be higher. Losses are often negligible in seasons with a wet finish, but inoculum levels still increase.

Tiller bases always brown, often extending up 2-4 nodes. Some tillers on diseased plants may not be affected. Whitehead formation is most severe in seasons with a wet start and dry finish. Plants difficult to pull up, often breaking off near ground level. Cottony fungal growth may be found inside tillers. Pinkish fungal growth may form on lower nodes especially during moist weather. Pinched grain at harvest.

Crown rot is most damaging in the northern region, but can cause large losses in other regions. In intensive cereal rotations without break crops such as winter pulses, canola or summer crops. Where the plant available water content of the soil is low, such as dry springs, shallower soils, or where there is an underlying subsoil constraint e.g. salinity, sodicity, or other root diseases such as root lesion nematodes. Where there is a lot of infected residue remaining from last year susceptible cereal crop. Where infected stubble has been mulched or cultivated close to sowing, this increases risk of infection via crown and sub-crown internode and can reduce stored water levels.

Fusarium survives predominantly in infected stubble and root residues, where it may persist for more than two years. In autumn spores from infected stubbles germinate and infect wheat/barley seedlings that are in close proximity to the infected stubble. The infection moves through the roots to the sub crown internode or leaf sheaths at the base of the tillers where the main infection occurs. The fungus multiples in the stems over winter blocking the plants plumbing and reducing the supply of water and nutrients up the plant towards the head. During spring spores are produced which then over summer in the stubble.

Crown rot has the potential to cost the Australian wheat crop $434 million annually or $36.44/ha.