Brown leaf spotis one of the most important fungal diseases of lupins in Australia and is widespread. Lupins are most susceptible to this disease in the colder parts of the wheatbelt and on soil types less favourable for lupin growth. Severe outbreaks can result in total crop failure. The fungus can cause both Pleiochaeta root rot, a serious root rot of seedlings, as well as leaf spotting. Roots that are infected develop brown spots and in severe infections may rot off. Plants wilt and eventually die. In less severe infections, plants lack vigour and the ability to nodulate effectively.

The spores of the fungus survive on the surface of the soil over summer and are incorporated during the subsequent season’s seeding operations. Additionally, the disease may survive on seed and stubbles. Spores in the soil can infect the roots but may also be splashed onto the leaves and stems of lupin plants. Spores on old stubbles may be carried to new lupin crops by wind.

The fungus infects the leaves, which develop dark spots, then rapidly die and drop off. Under moist conditions, large quantities of spores are produced on the fallen leaves. These spores can be spread by rain-splash to cause secondary infections within the crop. Spores can persist in the soil for several years and are the most important source of future infection. 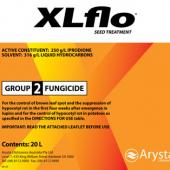 Xlflo is a specialist fungicide for the control of brown leaf spot and the suppression of hypocotyl rot in lupins.