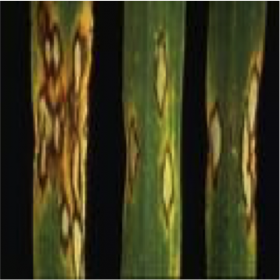 Leaf scald is a common disease of barley, especially in cool and moist areas. It is widespread in Europe, North America and Australia. Historically, scald has caused more severe crop damage in the Mediterranean type climates such as Australia.

The disease causes dark or pale grey ‘water-soaked’ lesions that develop into brown irregular shaped areas on the leaves, stems and heads of barley. The lesions eventually turn a bleached straw colour with brown margins.

Yield losses as high as 35-40 per cent have been reported, however, losses of between 1-10 per cent are more common. Yield loss is generally a result of reduced grain weight.

Scald is carried from season to season on infected crop residues, volunteer barley or barley grass, or in the tissues of infected seed. Thus, reduced tillage systems, where grazing, cultivating or burning is not carried out, encourage the propagation of this disease. If infected seed is planted, the fungus germinates with the seed and infects the coleoptile. Spores may also be spread onto the seedling by rain-splash from crop residues or neighbouring plants.

After the leaf tissue has become necrotic (developed brown lesions) spores are produced which can be further spread by rain-splash. Moisture is essential for dispersal of this disease - the disease is not wind-borne. Scald is more severe in early sown crops.