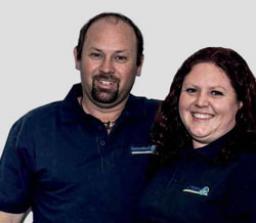 Introducing Terry and Kelly Jackson, the fresh faces of Hannaford in the Fleurieu Peninsula and Kangaroo Island region. Terry Jackson has a long history with farming, trucking and managing his own business, so is no stranger to organisation and hard work.

Terry grew up on a farm near Murray Bridge and, after leaving school, relocated to Meningie where he completed a Certificate in Farm Practice (Dairying). He met Kelly, a farmer’s daughter living in Strathalbyn, and moved into the trucking industry where he became well versed in a large range of driving including general freight, feed tankers and milk tankers.

When the opportunity arose for Terry and Kelly to be their own boss, they jumped at the chance and bought a small business  in the building industry. Through hard work and determination Terry and Kelly grew the business considerably (it now runs several teams), and gained an impeccable industry reputation for punctuality and an eye for detail along the way.

Their success enabled them to buy a small farming property at Nurragi, leading Terry back to his farming roots. “The Hannaford franchise opportunity was ideal, the perfect solution. We still run our own business and I get to stay close to the family.”

Terry will handle all infield operations with the Hannaford seed grading machinery, while his wife Kelly will provide strong backup through office and administration support.

The two are excited about their new venture, “Hannaford has a great reputation with Australian farmers dating back 90 years. They provided us with all the training, product range information and backup support anyone could ask for. We’re confident, we know we can offer a professional and reliable seed grading and treating service now. We’re looking forward to building a strong association with our clients”, Terry said.

Terry and Kelly look forward to assisting you with your seed grading and seed treatment needs in the future.