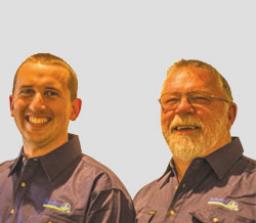 New Hannaford franchisees for the Eastern Eyre Peninsula zone, Brian and Gilbert Turner, are no strangers to the seed treating business.

Brian has a strong affinity with the Hannaford brand having previously operated the Port Lincoln franchise for 15 years. Joining Brian in the new venture is son Gilbert.

Brian hails originally from the Lenswood area in the Adelaide Hills, and his wife from Peterborough.

Brian trained as a Photogrametric/Geoditic Surveyor and after a stint mapping for the Royal Australian Survey Corps, he purchased a dairy-farm south of Adelaide and married Beth.

After twenty years dairying and raising five children, deregulation of the dairy industry prompted a move to a grazing property west of Port Lincoln.

"We purchased a Hannaford Franchise a couple of years later," said Brian. "That developed into a 16 year career, customers became friends, and the challenge of providing the very best service possible became all-important. During the entire time, Hannaford provided sterling support and back-up," he said.

"Life often forces us in unwanted directions; and so it did in 2014 when we reluctantly had to part company with Hannaford."

"With the family off our hands, we worked for three years in the Western Desert of the NT and had the time of our lives," said Brian.

"2017 saw another change and a return to the West Coast, where the opportunity arose to resume our work with Hannaford – and we grabbed it with both hands. But years take their toll, and now we will be working with our third son Gilbert."

Gilbert has worked in agriculture and civil engineering all his life and is well known on the West Coast.

"Between us we have a goal; To provide the very best seed grading and seed treatment - every time. With Hannaford support and quality chemicals, we have a winning combination," said Brian.

"We encourage farmers to take advantage of the Hannaford seed germination testing service this season, which is free for Hannaford customers," he said.

"Just take a sample, ideally before you grade or treat, and we'll check the viability of your seed for this year’s planting."