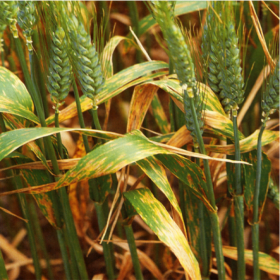 The damage caused by these fungi can range from nil to almost total loss of a crop. The intensity of the disease depends entirely on the time of onset of infection and the weather. Generally, areas with more frequent rainfall exhibit increased levels of the disease.

Mycosphaerella graminicola (Septoria tritici blotch) is ordinarily only found on the foliar parts of infected plants, while Leptosphaeria nodorum can be found on all above ground parts of the plant including the glumes around the grain.

Mycosphaerella graminicola usually survives on crop residues over summer and autumn. Rain and wind carry the spores onto the growing crop, hence infections can occur in wheat crops grown on virgin soil. However, disease is usually spread by rain splash from the soil surface or neighbouring infected plants.

On the leaves, spores germinate and produce a root-like structure that penetrates the leaves. This root network extracts sugar from plant cells, killing the cells and causing irregularly-shaped dead areas (necrosis) to be created on the leaf surface. These appear as tan-brown blotches which exhibit small black dots that are actually vase-shaped fruiting bodies. The black fruiting bodies release more spores that spread to neighbouring plants. Affected leaves may die prematurely.

NOTE: This disease is only likely to have significant effects on yield when the disease is present on the flag leaf and the two leaves below. This tends to occur during extended periods of high humidity in spring. Incidence is likely to increase with stubble retention. 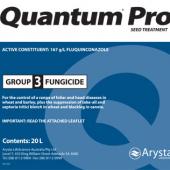